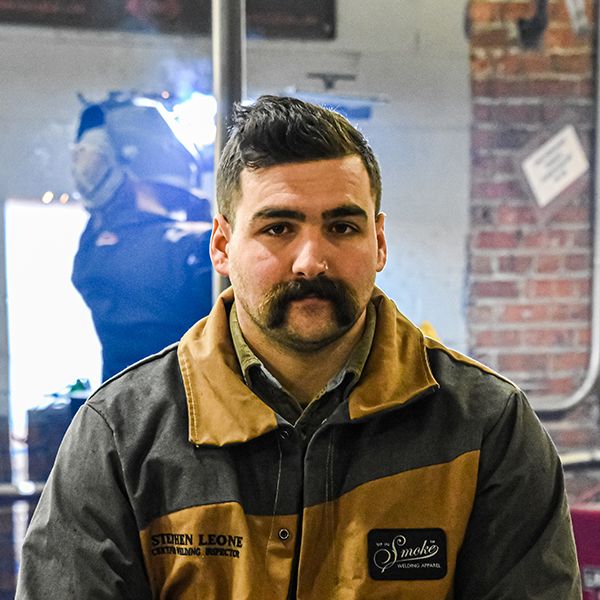 A New Port Richey, Florida native, Stephen Leone moved to Georgia in High School and played sports his entire childhood. Stephen stumbled into the welding industry by working at a construction company after High School. As outlined in a feature by the Georgia Contractor linked below, Stephen asked his boss to show him how to use the welding machine in the shop. His supervisor declined so Stephen would stay after hours and tinker with it based on YouTube videos and reading. Finally, his boss saw the initiative and trained him to become the lead fabricator and repair welder. Making foreman at just 21, Stephen was working on excavators, bobcats, concrete pump trucks, boom trucks and crane trucks. He also fabricated steel for commercial buildings.

If you follow welding content on YouTube, chances are you have seen Stephen whose mannequin video received over 100, 000 views.  He has also filmed multiple Pipe Welding instructional videos. His current role at GTS is verifying student certifications, welding and writing new procedures and storing and maintaining all certification records. He orders steel for the school and teaches the afternoon class.

Married for almost seven years to a wonderful outdoor and wildlife enthusiast, Stephen lives in Paulding County and owns his own welding business with a close friend. He enjoys softball, flag football, fitness and hiking.  Stephen’s favorite city to visit is Nashville and his favorite television programs are The Office and South Park. If he could have dinner with three historical figures, Mr. Leone would choose Franco Columbo, C.S. Lewis and William Wallace. His preferred musical genre is Alternative Rock and enjoys using the new Acworth bridge to visit restaurant row.

His advice to new students- don’t make excuses, do the grunt work, put the time in, pay your dues and do it with a good attitude. Show up early, stay late as supervisors notice those traits. Take the job you get and don’t complain about pay because you must prove your worth.

How to be my friend?
Answer: Sarcasm is key, rude abrasive, joking coupled with misanthropy will earn you a top spot in the chambers of my soul.

How to get an “A” in my class?
Answer: Earn it. Only winners and losers. The world doesn’t give out participation awards.

Quickest way to piss me off?
Answer: Tell me “You never told me that” when I know I’ve communicated it effectively and in great detail.

If I am mad you should……
Answer: Be quiet and weld on.

My specialty is……?
Answer: SMAW on Pipe.

Why I get out of bed?
Answer: I’m dedicated to my trade and I care deeply about mentoring young men and women to be the next generation of competent welders.

Why am I qualified to teach you?
Answer:  That aside I care deeply about the success of my students. I go to great lengths to ensure their understanding and processing of the information. I love what I do, that’s why I’m qualified.