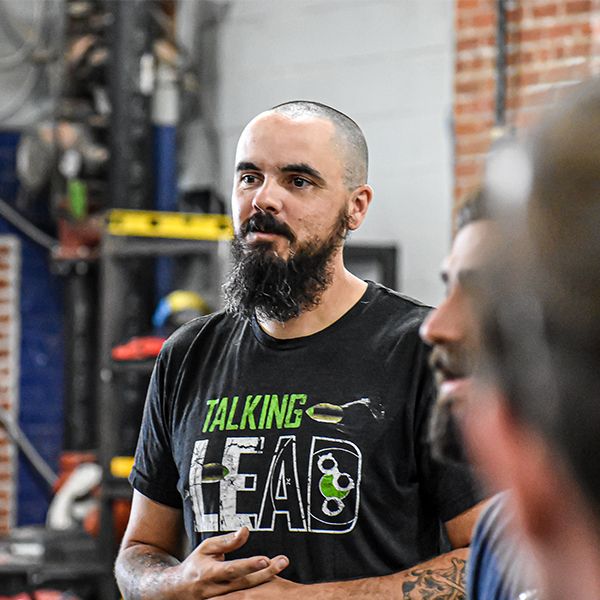 An Atlanta native, Scot McKneely grew up in Louisiana and later Acworth. After graduating from High School, Scot joined the United States Marine Corps where he would spend the next fourteen years including two tours of combat, the Iraqi invasion of 2003 and later in Afghanistan, including the 2010 Battle of Marjah in the Helmand Province.

Returning to civilian life, it was an uncle who worked in the welding industry that inspired Mr. McKneely to pursue a career as a welder.  Scot graduated from Georgia Trade School in 2015 and earned multiple Pipe and Plate welding certifications. He was also designated student of the month for his dedication to the craft.

Scot would return to Louisiana to begin his field career working as a TIG Pipe Welder in Port Allen for Performance Contractors. While at Performance, Scot welded on carbon steel, stainless steel, monel, iconel and chrome. Scot also built pipe sections for oil refineries including Exxon and Rhodia and worked on commercial kitchen equipment and stainless-steel tables as a Tig Welder and Fabricator for Frankie USA in Fayetteville, Tennessee

Mr. McKneely also worked as a MIG welder in Winchester, Tennessee where he fabricated farm and horticulture equipment including hoppers and augers. Scot also has worked on hydraulic systems, fabricating parts for companies such as Sunbelt Rentals, Apache Mill Rugs and Waste Management. Scot’s favorite project was a charity donation GTS made for the North Cobb American Legion Post, fabricating a bar and accompanying signage for each branch of the military.

Scot’s responsibilities at GTS include welding instruction, inventory management, shop operations, vendor relationships and recruiting at events like GACTE and the Cobb Future Fest.  His advice to new students is to be teachable, show up ready to learn and absorb all the information you are given.

Outside of work, Scot is a community leader who serves on the Board of Directors at the Kennesaw Baseball Association, coaches a travel baseball team at Titans Sports Academy and resides in Acworth with his wife and three children. When he is not at the baseball field which is rare, Scot enjoys hunting and visiting Baton Rouge. Additionally, Scot is an avid watcher of postseason Major League Baseball and listens to Hip Hop and Grunge music. If he could have dinner with three historical figures Scot would choose Teddy Roosevelt, General James Mattis and Ted Nugent.  The best advice Mr. McKneely ever received was to do what is right even when no one is looking, something he imparts to his students.

For his efforts in Cobb Youth Baseball, Scot was profiled in the December Issue of Around Acworth Magazine.

How to be my friend?
Answer: For a student, probably not possible! Served in my beloved Corps from 2000–2014. Let me coach your kid in baseball

How to get an “A” in my class?
Answer: Easy! Show up, listen, pay attention, study a little and put forth some effort

Quickest way to piss me off?
Answer: Ask me the same question over and over and when I tell you to do something you do the complete opposite

If I am mad you should……
Answer: Stay away! Blood makes the grass grow

What’s on my Mixtape?
Answer: Anything 90’s, hip hop or grunge

My specialty is……?
Answer: Being blunt and direct, adapting to millennial’s; GTAW  and anything SMAW

Why I get out of bed?
Answer: My beautiful, mean, awesome wife. My three boys and everything I can do for them.

Why am I qualified to teach you?
Answer: I have been a teacher and leader my entire adult life. 14 Years as a U.S Marine has taught me to lead and teach by example. I live my life by learning new things and trying to pass them on to future generations.