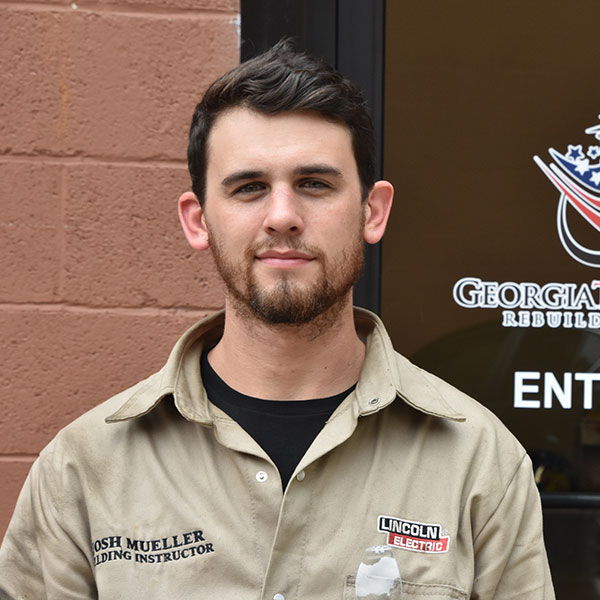 New York native Joshua Mueller joined the GTS Welding staff in the summer of 2018 following a stint at Aero Bridge Works, one of Cobb Counties top employers. While born in Poughkeepsie, NY in 1987, Josh grew up in Acworth and attended Harrison High School for a year before moving to Northern Virginia. A 2006 graduate of Warren County High School in Front Royal, Virginia, Mr. Mueller moved to Norfolk where he earned an Associate Degree in Drafting and Design Specialization for Mechanical Engineering Technology at Tidewater Community College. At Tidewater, Josh was introduced to welding and earned a stick certification.

While Josh could have pursued a welding career, he had accepted an offer from the world’s most valuable company, Apple Inc. and would spend the next seven years working in a variety of capacities including helping launch the Avalon store in Alpharetta. You can read more about Josh’s unique career path on page 12 in the link below from a 2019 feature in the Georgia Contractor Magazine.

Josh moved back to Georgia in 2011 and in 2013 learned about Georgia Trade School. Josh would enroll at GTS in 2017 and received a Mike Rowe Works Ethic Scholarship which led to being featured on the Mike Rowe Works website and social media channels.

Mr. Muller maintained his full-time job while a student, which is a remarkable achievement. Upon completion of our program, Josh began installing passenger boarding bridges in airports nationwide, primarily performing Shielded Metal Arc welds on 48” diameter columns. Mr., Mueller’s most memorable welding moment occurred in Memphis, Tennessee where after working for months on a jet bridge, he watched a Commercial Airliner taxied up to it, creating a great sense of accomplishment.

In addition to his teaching responsibilities, Josh conducts student orientations, inventory and stocking for shop materials.

A newlywed, Josh just purchased a home in Smyrna. In his personal life, Mr. Mueller enjoys rock climbing, hiking, motorcycles, breweries, Music Midtown and attending movies. Josh’s favorite television shows are Mindhunter and Castle Rock.  If Josh could have dinner with three historical figures, he would choose Jesus, Gary Vaynerchuk and Alex Honnold. His advices students to stay motivated, ask questions and don’t give up. Once you graduate stay respectful and learn as much from the experienced welders. Don’t complain and be on time for work every day.

How to be my friend?
Answer: Make me laugh

How to get an “A” in my class?
Answer: Hood down and always try to be better than the day before.  Studying might help also….

Quickest way to piss me off?
Answer: Trying to take shortcuts and being lazy.

If I am mad you should……
Answer: I don’t get mad.  If I do, you did something really wrong

What’s on my Mixtape?
Answer: Anything and everything.  Try and find something I don’t like

My specialty is……?
Answer: SMAW

Why I get out of bed?
Answer: Because I have the motivation to be better than the day before

Why am I qualified to teach you?
Answer: Because I’m passionate about welding and your future.  Let me teach you something cool.